In my previous post, I quoted a language-learner who said that fluency in “a language cannot be taught; it can only be learnt.” That said, there are many other aspects of language that CAN be taught, and this semester, I was fortunate to have one of the most amazing teachers ever: Koh-seonsengnim (lit. “Koh-teacher,” hereafter “Koh-ssn”), featured below. 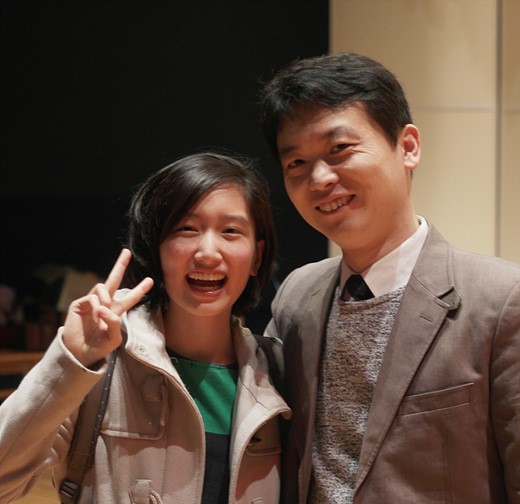 Here, I would like to reflect on his teaching techniques. Although I don’t want to become a career language teacher, I do want to get better at explaining things to my friends learning English. Further, learning to break down a foreign language in a way that makes logical sense to learners has also made me more conscious of what kinds of questions I should be asking as a language-learner.

Two of my favorite things about Koh-ssn were:

1. He was so good at explaining everything.

Here I’ll focus on how he explained vocab. In my last post, I wrote about how I generally focus my self-studying on grammar and syntax as opposed to vocabulary. Part of the reason is because it is simply less efficient to learn vocabulary on one’s own, especially when we’re talking about languages like Japanese and Korean that have relatively little overlap with English. And I’m not talking about “high-level” words like “democracy” or “computer,” which are easy to learn, because they have just ONE meaning. I’m talking about the so-called “easy” words like “hang.” Imagine how much of a nightmare it must be for English-learners to distinguish between “hang up,” “hang out,” “hang clothes,” “hang on,” “hang tight,” “hangover,” “hang around,” “to be hanged.”Imagine how much time it would take an English-learner to look up such words and idioms.

Then if you’re diligent, you look up the etymology or try to figure out mnemonics or other ways to remember the word.

Now imagine if someone just told you all of that information. That was Koh-ssn! Although the level we were in (Korea University Level 5) focused mainly on words with one meaning, such as “noise pollution,” and “management philosophy,” Koh-ssn made an extra effort to explain the mundane words–the words we take for granted–whenever they came up in the textbook (or whenever he thought of a fun one!). He also knew that simply learning a word is not enough; you must understand it and all its intricacies in order to make it your own. And here’s how he helped us do that:

Often times when you ask a native speaker (sometimes even a teacher!) to explain why a word sounds the way it is, they’ll say, “I don’t know. Just memorize it.” But actually almost all words have a raison-d’etre and conveying that to a learner will make it way easier for them to learn (i.e. remember) the word. And it’ll also enrich their learning experience! I’ve had so many “aha!” moments in class this semester that made me love learning Korean so much more.

2. He helped us sound natural.

This was going above and beyond. A lot of teachers don’t feel the need to help their students sound natural. Their logic goes, “You’re a bunch of foreigners anyways! You’re supposed to sound awkward.” There are also very few foreigners who speak languages like Korean naturally (partly because it’s not related to any other language), so these teachers probably don’t think it’s possible.

But if it’s possible for many Koreans to speak near-perfect English, then it is also TOTALLY possible for us to do the same, and Koh-ssn taught us a lot of tricks to help us do just that.Here are some examples I can think of off the top of my head (note these were NOT in the textbook):

Yes, both of these are very, very minute differences, but by teaching us these differences, he helped us wrap our heads around how Koreans think in their language. I find such differences fascinating and they have helped me love learning Korean even more. And helping students love what they’re learning is part of what makes a teacher AWESOME.
While one of the pitfalls of language classes in general is that you don’t have many instances to make your own original sentences and get corrected, I thought it was an acceptable trade-off considering how much I learned during Koh-ssn’s lectures. I also supplement my lessons with language exchange sessions where I can practice the things I learned.
Lastly, besides being a remarkable teacher, he was also all-around hilarious and made an effort to befriend all his students. During class, he shared personal stories, from his efforts to quit smoking to his daughter asking him if he liked Elsa or Anna better. After class, he joked around with us on our class chat room on KakaoTalk (the Korean equivalent of Whatsapp or GroupMe). And on field trips he took photos of all of us like we were his kids.

He drew caricatures of all of us.

He also played pranks on us.