Despite not being a flashcards person, I am loving this app called “Flashcards Deluxe”! Read on to find out how I’ve converted this powerful program into a vocab notebook.

From Vocab Notebook to Flashcard App

When I was learning Korean, I started using pocket-sized notebooks with half of a page in my target language and half in my base language(s).

I would take these around in my daily commute and quiz myself. I had previously used flash cards on an app called Study Blue, but reverted to physical notebooks in order to cut down on my screen time and conserve phone battery. However, there were a few problems with paper notebooks:

I was ready to migrate to a digital system. There are a number of vocabulary notebook apps, but most lack a number of basic functions, such as space for sample sentences, categorization, search functionality, and backup. I also tried Anki, but didn’t find it to be very user-friendly.

So I was very delighted when my friend Jake introduced Flashcards Deluxe, which lets me do virtually everything I could do with my notebook and has all the basic functions covered. It was worth all 399 pennies I spent on it. The maker of the app, Ernie, also kindly answers inquiries through email!

On the left is my current list of verbs. You’ll notice that this set-up looks not too different from my vocab notebook. Unlike a vocab notebook, there are words cut off, probably because the app is designed primarily for quizzing yourself through flashcards and not for browsing. However, that’s a trade-off I’m willing to take, because it’s 200% neater than my vocab notebook, plus I can attach pictures and search through my entries.

My transition from notebook to a flashcard app was not without its bumps. A flash card app is, obviously, made with flashcard, not notebook, users in mind. I still don’t like that I need to first exit out of flashcard mode before seeing my list of words. As of right now, there is no way to bypass the flashcard mode, though Ernie says he may eventually add this function…

Other than that, though Flashcards Deluxe is an extremely versatile app that supports many aspects of language study. My friend Jake, for instance, is using it to learn Japanese word intonation and kanji. He can also flip through the deck front side first AND back side first, gathering two separate sets of statistics that tell him which words he needs more practice recognizing vs. recalling.

I don’t need anything that fancy for the moment, but taking a cue from him, I also started to use Flashcards Deluxe creatively!

How I Adapt the App for My Learning Needs

I’m not a huge fan of spaced-repetition systems–a post on that later. For now, just know that I don’t need such a systematic way to learn vocabulary; I just need to assimilate enough natural-sounding language to sound like a native speaker, which is my ultimate goal.

When I’m making my lists or adding more entries, I’ll flag entries that I don’t remember. I flag that word, then use the “filter” button on the bottom left to display only flagged entries to review those. To quiz myself on new entries, I order the cards in order of when they were added and get the new ones to show up at the top. Go to List > Order by “Card Order”, Reverse Order.

Real-world examples of how a word is used is extremely important to learning to speak like a native speaker, since they *tend* to be verified models of usage! Usually the words I add to my flash card deck are words I encountered in videos I watched or Facebook posts I saw that made me think, “Wow, I want to use that!”

Both methods enrich my interaction with an entry, allowing me to better retain it.

However, since the app doesn’t wrap text, I can’t display my examples underneath the entries as I did in my vocab notebooks. What I can do is put the English and French examples in sides 3 and 4 of the app, then set the card layout (so that the sides 3 and 4 display underneath sides 1 and 2 when I hold down the entry, like so:

3. I categorize my entries. 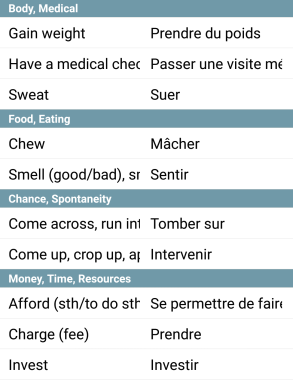 I’m also thinking of eventually categorizing by frequency (how frequently I need to recall/recognize the word) so that sometime down the line, when I my active memory of French fades and I want to brush up my speaking abilities, I can start by familiarizing myself with high-frequency words…

Flashcards Deluxe is great in this respect as it allows you to not only categorize entries, but also put the same entry in multiple categories! As you can see, my entry on “teaching somebody to do something” is in two categories: a grammar-based category for auxiliary verbs and a topic-based category “teaching, learning”: 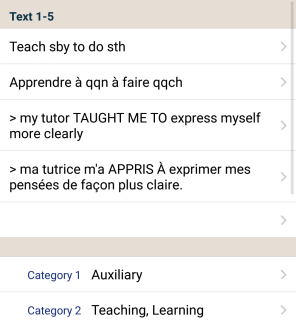 As you can see, Flashcards Deluxe is not the most perfect notebook there is, but it gets me pretty darn close: I can categorize my entries, find the ones I added most recently, include context, and mark entries that need review. Plus, it comes with with many handy functions I didn’t have with a paperback notebook.