During my week there, Fukuoka felt like a really nice, liveable, and welcoming city. Here, I’ll list my favorite parts of the city (my favorite fun surprises!) … maybe you’ll like them too 😀.

This post is split up into a Fukuoka section, a Hakata section (they’re basically the two halves of the city), and a “People section.”

I stumbled upon this alley when coming to a restaurant that my friend John recommended — the Izakaya Makoto.

It was a little hard to find as I wasn’t expecting there to be an alley next to a shrine, but I could smell the appetizing smell of grilled fish from the other side of the shops.

The people in the picture are lining up for the restaurant, but the line moved quickly, thanks to the fact that there’s only one thing for lunch: freshly grilled fish with delicious pickles, chilled tofu, and some soup … all for ¥900. When I went, it was literally all businessmen, which was also an experience. Then I went to the cafe next door that is run by a little old lady.

The alley is between the Akarenga Cultural Center 赤煉瓦文化館 (brick building on the left) and the Suikyō Tenmangū Shrine 水鏡天満宮 (on the right):

You can also check out the shrine. It’s dedicated to the God of Learning (more on that in this post.)

The Tenjin Underground Mall is the underground mall that branches out from Tenjin Station. An underground mall might sound lame, but I promise it’s anything but. Imagine stepping out of the metro and seeing this: 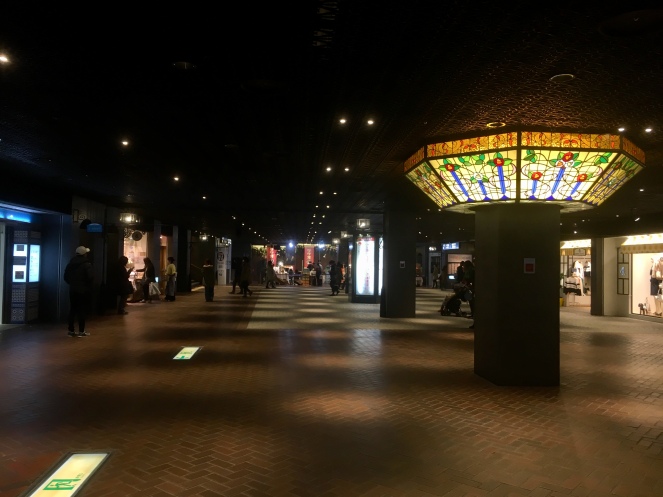 Yeah, not your typical underground space, let alone a mall! Here are some advertisements on the wall that keep to the stained glass motif:

The people who made this place really went the extra step to make it the most pleasant underground experience.

Even as someone who doesn’t enjoy shopping, this mall was nice to stroll through, which I did everyday as I preferred walking here over walking above-ground in the cold. And at 690 meters, it certainly makes for a looooong stroll!

This park combines beautiful landscaping, a pine forest, and ancient history (including the oldest excavated toilet in Japan!).

Ōhori literally means “large moat,” referring to this lake, which started off as a most to the Fukuoka Castle and then was turned into a park in the 1920s.

Also in the park is the excavated remains of an ancient trading facility Kōrokan 鴻臚館, which looked like this in its heyday: 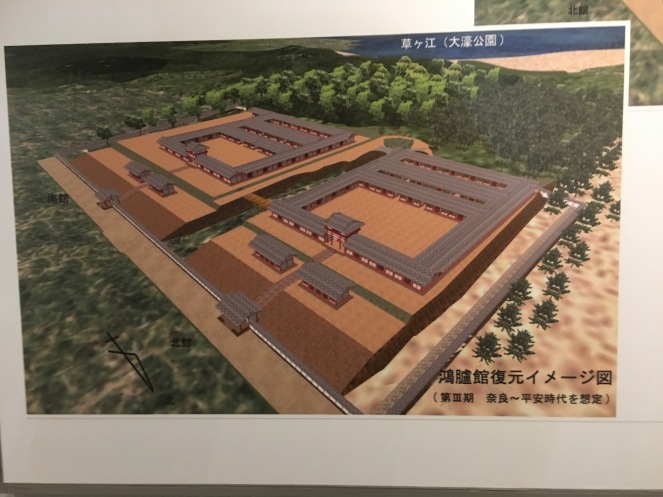 It was where traders and officials from the Heian period stayed before setting off to China, Korea, and other countries. You can check out the Korokan Ruins Museum (English-friendly) to learn more. What I found most intriguing was the ancient excavated toilet in the middle of the field in front of the museum:

And here’s a picture of what it may have looked like:

With what they found in the toilet (and other evidence), scientists were able to piece together what people ate there back in the day.

Speaking of what to eat, I found a specialty kurobuta (black pork) cutlet place nearby called Taishōtei (黒ブタかつれつ専門店 大正亭). Not wanting to fork out ¥1500+ on lunch, I opted not to order kurobuta (their #1 recommended menu item), instead ordering a 茶美豚 cutlet for ¥850. It was honestly one of the best pork cutlets I’ve had. (I think Fukui’s sauce cutlet is still my favorite.) The decor is also really retro. Another nice thing about this place is that it’s open for late lunch.

Another interesting surprise for me was the fact that Fukuoka has defensive walls remaining from the days of the Mongol invasions!

This wall was built after the first invasion and let Japanese forces buy time during the second invasion, depicted here: 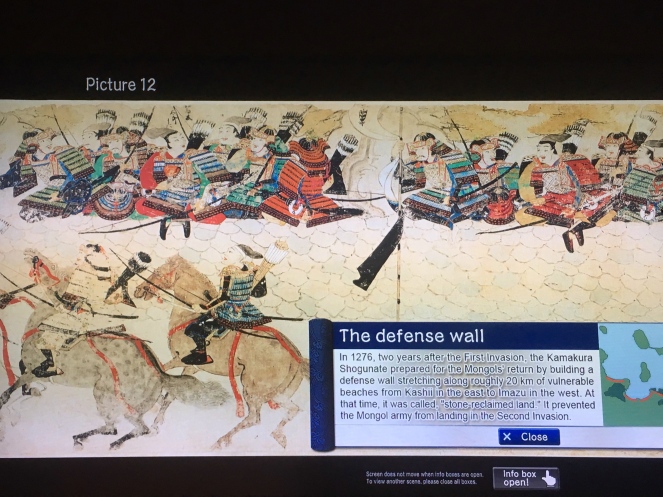 I took this photo during a trip to the Fukuoka City Museum and discovered while reading a pamphlet that various parts of the wall are still around! So I decided to check them out (might as well take a walk, I thought).

Nearby the walls, there’s also this pretty temple: 黄檗宗 大悲山 千眼寺. Its walls are white and it has a stylish garden. Looking it up, I learned that it belongs to the third largest Buddhist sect in Japan, the 黄檗宗 Ōbakushū school. I don’t know much about the Buddhist sects, but this one was founded by a Chinese monk named Ingen 隠元隆琦 who was invited to spread Zen Buddhism to Japan in the 1650s.

(If you speak Japanese, his name might sound familiar — that’s because green beans are called “ingen beans” in Japanese! Apparently, he brought green beans with him to Japan. The Chinese had gotten green beans from the Europeans who had gotten them from South America during the Colombian exchange.)

Kawabata shopping arcade has been around for over a hundred years and has over a hundred stores. It’s well worth a walk around, whether you’re looking for food, cafes, stores, or are just making your way from Fukuoka to Hakata.

One thing I found interesting was all the stores selling butsudan (household shrines that people use to put the ashes of their deceased parents/grandparents in and then pray to every day)!

Mochikichi is a famous senbei (rice cracker) store from Kyushu. I chanced upon their Hakata store when I was in the mood for some afternoon tea and discovered that they have “inari-mochi” (mochi wrapped in sweet, fried tofu skin):

They even made a video to show you how delicious it is.  I recommend it 150%. Matcha optional (and I’d even recommend against it — I personally felt that it paired better with the tea the store provides for free.)

It’s next to a temple called Tōchōji, where you can see a massive indoor Buddha. I didn’t go inside, as I was intrigued enough by the tombs outside.

博多塀 funky Hakata walls 😍Walls like these were apparently built after the Warring States period. The tiles and rocks were burnt by the flames of war.

No matter what you do, you’ll definitely feel warmly welcomed by people in this city. But here are two specific places to meet some locals and learn about the city from them!

I’m sure there are plenty of bars in this city, but the one I happened to go to is a bar located in a start-up center housed in a former elementary school.

Fukuoka is a start-up hub and the government is working hard to make it easy for people to come to Fukuoka to start businesses in their city, so at this bar, you’ll meet lots of locals as well as people who liked Fukuoka enough to move there and start families and businesses there. Don’t be surprised if they try to convince you to join them in the city!

I went there by myself and read some informational brochures. Since I never go to bars, I wasn’t really sure how to approach people. Luckily, some people kindly struck up conversation with me, introduced me to other people in the bar, and we ended up having dinner together afterwards! It was a great night! Not to mention that I learned a lot about some local businesses and initiatives as well.

Check out the website here. It’s definitely more enjoyable if you speak Japanese, but there were also people who spoke English (and other East Asian languages!).

There are free hour-long tours of Fukuoka and Hakata every day led by friendly old people! Of course I went on both tours 🤓  It’s a fun way to get to know these two downtown areas and also a great way to hear about how the city has changed.

For example, the tour guide for the Fukuoka tour proudly told us about his city and how it’s gotten cleaner and prettier in the past few decades and how he hopes it will continue to get better and better.

He also pointed out some things I wouldn’t have noticed, like how the flowers of Fukuoka are planted by local businesses:

And that’s a wrap!

Of course, there’s much much more to do in Fukuoka, but those were just my highlights. A huge thank you to Stephane for hosting me during this trip and recommending so many places, including the Awa Bar 🙇🙇🙇

And if you want a little more guidance on your visit, check out these tours:

Yes, these are affiliate links, but these tours actually look really fun and I’d like to check them out next time I’m around 😃